I fell in love with reading many times as a child and teen. A great book would find its way into my hands and I would reluctantly start reading, only to be surprised when I loved it. After I was done, I’d vow to read more. Then I’d get distracted by the new Green Day CD or an episode of Friends.

It wasn’t until I hit college that reading really stuck with me. It was the day before Thanksgiving break my sophomore year. My roommate was a Writing, Literature, and Publishing major at our arts school. I was complaining about what to do on the train ride home and she suggested I pick up a book. I was less than enthusiastic about this idea. (A lot of people spent their childhoods mildly embarrassed by how much they loved to read, but I spend my adulthood mildly embarrassed about how little I read as a child.)

Having no better suggestion, I acquiesced to hers. She loaned me one of her favorite books, The World According to Garp.

I fully admit that had I been left to my own devices, I would never have chosen a John Irving book to read at all. When I was reading, I was reading books like Bridget Jones’ Diary and High Fidelity. As I sat, bored on the train ride home, there was nothing to do but read the old, dingy book. 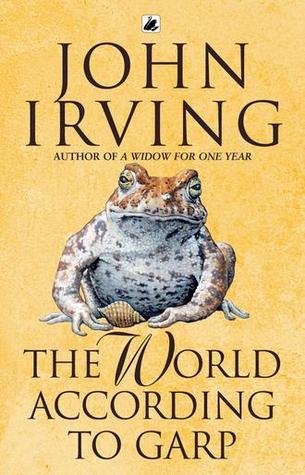 The World According to Garp is like all John Irving–which is to say that it is vulnerable, and compelling, and real. It is also uncomfortably specific and downright bizarre. Garp hits close to the nerve in ways that sometimes makes you want to shut the book. However, it’s deeply, deeply human and absolutely unforgettable. I say that both because the characters and the feelings are incredibly original, and also because John Irving’s plotting and choices create scenes that are so shocking as to be seared into your brain. Anyone who has read The World According to Garp will know the very scene in the book that I’m talking about. (Hint: Driveway + Wife = OMG)

But it wasn’t the fact that I couldn’t put the book down, or how much I came to care about the characters, or even how unique the story was, that got me hooked on reading forever.

It was the narration; John Irving’s voice.

It was the calm but all-knowing narrator that bounced around in my head as I read, veering from the present into the future and back again. The way there was nothing rushed about the story and yet you rushed to read the next page simply so that you could keep hearing that identifiable cadence.

I finished the book that holiday weekend and I was sad to close it. As I got on the train to go back to school, I heard John Irving’s narration narrating my own life. I could hear the way I thought he would describe the train, describe me. I could hear how he would tell the imaginary reader about the people commuting with me. This made the ride more interesting and my mind more dynamic.

I finally understood just how incredible of a connection could be had between an author and an audience.

The World According to Garp wasn’t just a book to read once in the hopes of entertainment. It was something I could take with me into other experiences. This was a lens into a different way of viewing the world.

It took years for me to discover that my dream was to be a writer, that I wanted to create a voice that might echo in other people’s heads, might make them feel less alone on a train ride back into the city. On that train ride, I still had no idea how much I loved to write.

But I learned just how much I loved to read.

Taylor Jenkins Reid is an author and TV writer living in Los Angeles. Her debut novel, Forever, Interrupted, has been optioned for film with Dakota Johnson attached. Taylor’s most recent novel, Maybe in Another Life, was released July 7, 2015. Her next novel, One True Loves, is expected to release on July 12, 2016.