J.K. Rowling’s The Casual Vacancy is a far cry from Harry Potter, as any reader of the books will know. Instead of childhood fantasies about wizardry, The Casual Vacancy is an examination of addiction in its many forms. Examined through the lives of twenty-two people, Rowling investigates how much each addiction costs society (monetarily, socially, and progressively). 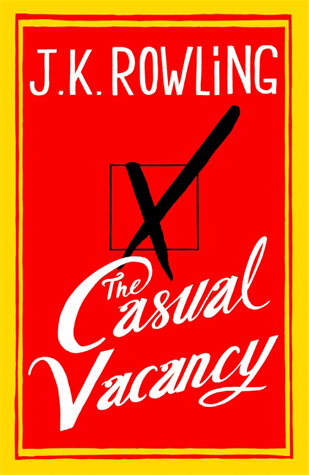 Aside from the fact that The Casual Vacancy is 500 pages (and doesn’t need to be), it is full of lessons that we can all learn from. Rowling engages addiction in a way that many people might not catch at first glance. Addiction isn’t just about drugs and the physical need to have them (whatever the cost), but about how addiction plagues lives in many more ways than one.

The only thing at risk here isn’t addiction and its rabid pillage through people’s lives, but a political, social stigmatization. The single setting of The Casual Vacancy that is at risk of being closed down, Bellchapel Addiction Clinic, is directly and indirectly a part of every one of Rowling’s twenty-two characters’ lives. Some of them need the addiction clinic to see their way through the haze of physical addiction, and some are keen to close it down and shun these struggling people forever. Here, the endeavour lies.

Barry Fairbrother, arguably the most central character of the book despite his death on the third page, is the Fields’ champion.

He is a prime example of a “way out” through education, having grown up in the Fields. When Fairbrother dies, his seat on the Parish Council is left open, doubling as an opportunity for anti-Fielders to get another (and arguably deciding) vote to force the Fields out of Pagford. Fairbrother was seen as a hero in the Fields, and as a villain to greater Pagford. Undoubtedly Fairbrother was a hero, fighting addiction, social stigmatization, and endless lifestyle cycles until his dying day.

The most obvious kind of addiction that’s explored in this book belongs to Terri Weedon, a heroin addict. Terri, no matter how many times her children are taken away, how many people have died because of the addiction, how many people have given up on her, cannot let go of heroin. This of course, extends to other vices (cigarettes, laziness, men, a constant need to please those who mistreat her). Heroin destroys her life.

Terri’s children, Krystal and Robbie, face the worst parts of addiction: they love someone, and are under the care of someone, who will always choose heroin over them. As a result, Krystal is promiscuous, misguided, violent, and has been violated (both physically and mentally) her entire life. It’s a miracle that Krystal has any ambition to leave the Fields; she’s been permanently scarred, believing she’s seen her biological father dead on the bathroom floor. Robbie, too, has been irreparably impaired: in his three years of life, he’s lived in several different homes, transitioning from absolute filth and horror to a stable, happy environment.

And then in the end, Robbie and Krystal both end up dead. And their mother is alive. Nothing is fair.

What’s interesting here, though, is that alcoholism is explored through the eyes of someone who wouldn’t necessarily be pegged for an alcoholic.

Samantha Mollison, wife of Miles Mollison, empties bottles of wine like they’re water. She’s unhappy with her life (which becomes clear when she starts fantasizing about young men), and will do anything to escape the torture that is her life in Pagford. Her addiction is dangerous because it isn’t one that’s widely acknowledged; she coasts under the radar.

There are characters in this novel who are engrossed in politics to the point of obsession. The fight to push the Fields out of Pagford, in a sense, becomes an addiction.

Howard and Shirley Mollison are absolutely obsessed with getting rid of the Fields. Their entire lives revolve around this one mission. They even go so far as to influence their son, metaphorically forcing him to run for Parish Council. There is nothing in this world that could stop the Mollisons from ridding Pagford of the Fields, and in this, they become political and social stigmatization addicts.

As with Parminder and Sukhvinder Jawanda, addiction lives behind closed doors and by the cover of dark.

Parminder has, perhaps, been in love with Barry Fairbrother for a long time. Despite her marriage to a beautiful doctor and her three imperfectly perfect children, Parminder isn’t fully happy in her life. When Barry Fairbrother dies, it’s clear that she has to make a valiant effort to keep herself together. Could she have been in love with him this whole time? This secret is her addiction.

Sukhvinder’s addiction is a much scarier plight. Self-mutilation is how Sukhvinder finds peace; the physical pain releases her self-hatred. While wearing long sleeves (which she always does), there is no evidence of this violence. Self-hatred and pain-release become everything, spiralling into a full-on addiction. This act becomes a part of Sukhvinder’s everyday life.

In taking out the anger one feels toward oneself on another, relief is found. Abuse. Repeat. The cycle continues.

There is no end to Simon Price’s abuse of his family. Simon’s wife, Ruth, is terrified, as is their son Paul. Eyes are blackened, cheeks are reddened, and hatred is ever on the rise. Andrew Price fights his father’s addiction in the only way he knows how: by anonymously sabotaging him. In this sabotage, readers are genuinely frightened that Andrew might be caught, that he might have pushed too far this time. What if Simon kills his son? Could he get that angry? We might never know.

Colin “Cubby,” Tessa, and Stuart “Fats” Wall are as dysfunctional as it gets.

Cubby dreams and daydreams about terrible things, and when he wakes, he’s not sure if what he dreamed was real. Tessa finds comfort in overeating. Fats smokes cigarettes, bullies (fellow students and his father), and has detached sex every chance he gets. This dysfunctional lifestyle is easily kept up with no confrontation of what isn’t working. The more this negative behaviour continues, the more it’s encouraged.

In an interview with James Runcie, Rowling said, “I’m interested in the moral weight, if you like, that we give to different kinds of addiction.” Addiction is explored through many avenues in The Casual Vacancy, and it’s obvious that some addictions are weighed more heavily than others. But should they? Every single one of these characters is struggling, whether for their life, their freedom, or their happiness. A struggle is a struggle, and no one can judge which struggle is worse.

All in all, while the book is very long, the story is an important one. There is an important message here. Addiction can be as easy to spot as clouds in the sky, or as difficult to spot as a single blade of grass from a mile away. Addiction is sometimes completely public and sometimes hidden behind doors that won’t ever open. Whether addiction is known or not, it is a problem. Every kind of addiction produces struggle. And the struggle affects everyone.