There was just something particularly magical about this book. Half Blood Prince is among my three favourites in the series. I’ve reviewed my other two favourites, Prisoner of Azkaban and Deathly Hallows. Half Blood Prince is particularly memorable not only because of the massive steps forward in plot (Dumbledore and Snape, hello!), but because the character relationships in this book were so on point. 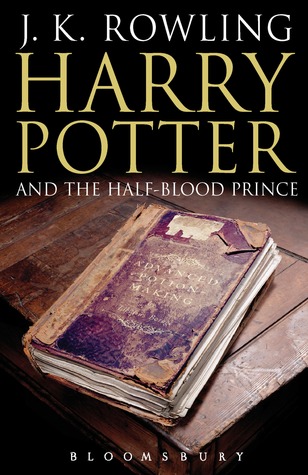 Half Blood Prince really made me understand Harry and Ginny’s relationship, which I have a newfound appreciation for since their relationship wasn’t really explored in the movies. Have you noticed that? Harry and Ginny’s relationship was such a huge deal in the books, and then in the movies it was pretty much glossed over. I missed the exploration of their relationship and didn’t even know it. If you haven’t re-read Half Blood Prince in a while, I totally recommend it. It’s like reading it for the first time all over again because the book has so much more than the movies were able to offer.

There are two huge plot/character twists that happened in this book that are worth mentioning as the reasons for Half Blood Prince receiving five stars from me.

Firstly, Dumbledore’s death. Surely we can all agree that this was a horrifying moment to read; I was in denial the first time I read it. I was convinced that Dumbledore would be coming back from the dead. It wasn’t until I read an interview with Rowling that I came to realize this was actually happening: Dumbledore was dead and that was final. His funeral was emotional and definitive. To top it all off, Harry and Ginny broke up at his funeral. This ending was so devastating and heartbreaking. Like, wow. Incredible writing.

Then there was Snape’s joining forces with Voldemort. Snape killed Dumbledore, and all along we thought they were a team! I remember feeling conflicted about this the first time I read it: Snape killed Dumbledore, which was horrible, but he also saved Draco Malfoy from this fate. Perhaps he isn’t as evil as we’re meant to think he is… Now, having read all of the books, it’s clear what was really going on. If you look closely, it’s all in the language. The plotting here is masterful. To have this all figured out before writing a word of the book… it’s genius.

There is action from start to finish, which is something I’ve always valued in Jo’s writing.

There is never a lull; the plot and character motivation are always moving forward, as in life. I think that’s why I love her books so much: even though they take place in this magical realm, they feel real. Half Blood Prince is probably the book that changed in the biggest ways from book to movie, which is why I tell everyone they should read the book. As with anything Jo Rowling writes, you will not regret it.